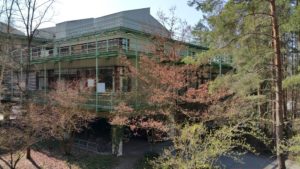 Research at the Chair of Applied Physics concentrates on electrical and optical properties of solids since its establishment – this is, in short, solid-state physics. In the year of establishment, this discipline was a cutting-edge topic in physics. The birthday of “Solid-state physics” (at least the wording) is dated approximately 1937; in this year, a major international conference on “Electrical conduction in solid materials” was held in Bristol.

Today, solid-state physics is cutting-edge as always; our whole modern world with all its electronics is based on investigations, results and inventions of this physics discipline. Moreover, there are new hot topics of solid-state physics in research such as low-dimensional materials like graphene or nanowires, molecular junctions and innovative semiconductor materials with properties beyond silicon. At the Chair of Applied Physics, we push forward the research on these topics with the goal to understand and establish the fundamentals for future electronics.

The Chair of Applied Physics was established in 1948 as the second physics chair in Erlangen. It was headed by the solid-state physicist Prof. Erich Mollwo until 1976. In the beginning, the chair was accommodated in the “Gründerzeitvilla” located in Glückstraße 10 in Erlangen. 10 years later, the chair moved into a new building just across the street (Glückstraße 9; today, the dental clinic is found at this place).

Since December 2004, the chair is headed by Prof. Heiko B. Weber. The second professorship was held by Prof. Tilman E. Schäffer from 2007 until 2011; his successor became Prof. Vojislav Krstić in 2013.